This is the third and final part of the story of how I broke down a 30-year old brick wall in my research. Read Part One and Part Two first…

My search for the origins of my great great grandfather, Thomas Port, had come to a shuddering halt when I failed to find a record of his birth. I knew from the census returns[1] that he was born around 1820 in St Pancras, London, but there was a big question about his parentage, with his two marriage certificates suggesting that he was almost certainly illegitimate.

Over the next fifteen years or so, I was able to build up a fairly full picture of Thomas’s life, but nothing in the documents that I found gave me any further clues about his origins. I made a breakthrough of sorts a few years ago when I discovered that Thomas had been buried at Key Hill Cemetery in Birmingham[2] and I made an emotional trip to see the gravestone. What I found seemed almost to satirise my prospects of finding anything useful; the stone had fallen over some years ago and now lay on the ground in shattered pieces. Much of the fragmented text had been lost but I could read enough to tell that there was nothing there that was going to help me with my quest. I stood next to the grave and made my feelings quietly known. Thomas, it seemed, wasn’t about to give up his secrets that easily… 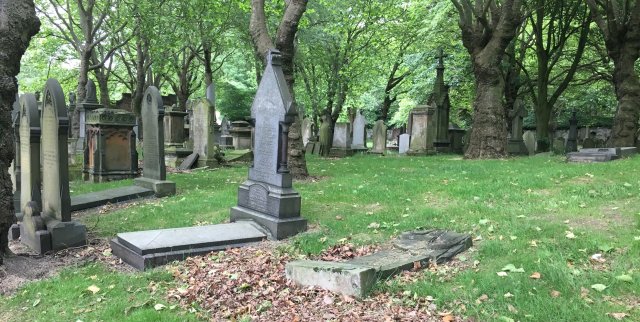 Key Hill Cemetery, Birmingham. Thomas Port’s gravestone lies, broken, on its back, in the foreground. Photograph by the author, June 2017.

Most of my research had been focussed on the family of Mary Ann Port, the woman who had died in Buckingham in 1846, the year before my Thomas had married for the first time. Having been born in 1788, Mary Ann was certainly of a suitable age to have been Thomas’s mother (she would have been about 31 at the time) and I hoped that, by comprehensively reconstructing her family, I might find a clue that would connect her and her family to Thomas.

I made some great discoveries. It turned out that Mary Ann was the woman that I’d found living as an inmate in the Northampton County Asylum in the 1841 census.[3] She had worked as a governess in Buckingham for the family of the wonderfully-named Reverend James Long Long (he’d changed his name from James Long Hutton for inheritance purposes and must have cursed his parents for giving him that middle name!) and the Long family had paid her asylum fees until her discharge in April 1845.[4] 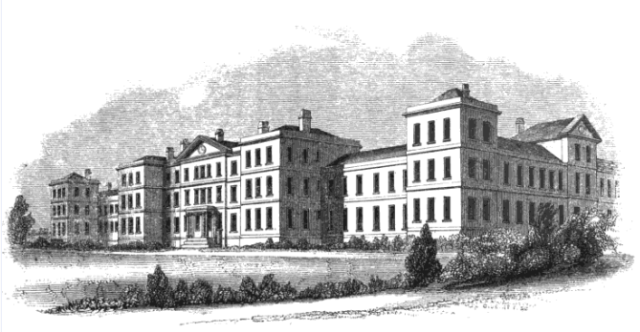 Engraving of Northamptonshire County General Lunatic Asylum from Wetton’s guide-book to Northampton and its vicinity by Edward Petty (1849) https://commons.wikimedia.org

Mary Ann was named as a beneficiary in the will of Henrietta Long (James Long Long’s wife) written in 1834.[5] I knew that she had been in the care of the Long family since December 1804 thanks to a remarkable document (or rather, a remarkable series of documents) uncovered in the course of my research.[6] When Mary Ann’s father, Samuel Port, the wine merchant of Savage Gardens in the City of London wrote his will on 13 February 1799, rather than simply leaving everything to his wife and children, he appointed three of his friends (Richard Hovil, Aaron Morgan and Bishop Hull) to act as his executors, also appointing them as guardians of his children.[7] Samuel died on 4 April 1799 and we can only assume that he felt that he’d left his affairs in safe hands. This, however, was not the case.

The executors hadn’t quite fulfilled the trust placed in them by Samuel. At least, not according to the Bill of Complaint lodged at the Court of Chancery on 5 June 1806 by Elizabeth (Samuel’s widow) and the three surviving children, Ann, Mary Ann and Thomas and their ‘next friend’, James Lawson.[8] James Lawson was married to Mary Ann’s cousin, Mary Ann Truman. The case, in true Jarndyce v. Jarndyce style, ground on for at least 11 years, before collapsing following Elizabeth’s death in April 1816. As far as I’m aware, Mary Ann and her siblings never got what they felt was owed to them.

Extract from an ‘Entry Book of Orders and Decrees’ in Chancery, including a reference to Mary Ann Port residing ‘at Buckingham … with Mrs Hutton a friend of the said Plaintiff Elizabeth Port‘ The National Archives reference C 33/601 ff.1003r-1005v

Her sister, Ann, was a mystery to me for a long time until I found a record of letters of administration being granted to her brother Thomas in 1823.[9] Ann, it seemed, had died in Germany, where she had been working as a governess.

Thomas proved to be a fascinating character. He was a grocer and he lived in St Pancras – precisely the details given by my Thomas for his father at the time of his second marriage! For years, this was the strongest evidence I had in favour of a link between my family and Mary Ann’s but it didn’t constitute proof. Thomas was in business with a man called John Garthwaite (who was married to another Truman cousin) and I found a record of their partnership being dissolved in 1817.[10]

Thomas was involved (as the victim) in a case of theft, tried at the Old Bailey in 1823 and he later moved from St Pancras to Berkhamsted in Hertfordshire, where he died in 1841.[11] Thomas had three illegitimate children (James, Charles Thomas and William – all by the same woman) born between 1827 and 1835,[12] but for a number of reasons I didn’t (and still don’t) think that he was the father of my Thomas. His use of the name Thomas as a middle name for his second son, for example, would be quite unusual if he already had a son called Thomas.

Samuel Truman, Mary Ann’s ‘Cousin German’ and one of the administrators of her estate turned out to have worked as a clerk at the Legacy Duty Office in Somerset House – one of those responsible for producing the wonderful Death Duty Registers which I had become so interested in while working for the National Archives. Samuel’s wife, Ann Hamley,[13] was connected to William Hamley, the founder of the famous London toy shop. I had hours of fun following up these and other equally fascinating leads.

But the most interesting relative of Mary Ann’s that I found was John Joseph Lawson, the son of their ‘next friend’ from the Chancery case, James Lawson. James was the printer of The Times (yes, The Times) and a 1/16th shareholder in the newspaper. He died in 1817[14] and passed the business on to his son. John Joseph was to become a cause célèbre in the world of journalism after being imprisoned in 1839 for printing an article which was found to be libellous. It was, at that time, the printer and not the publisher who was held liable for the publication of the piece, and therefore, was guilty of libel![15]

Mary Ann’s father, Samuel, offered me all sorts of opportunities to explore English records. He became a Freeman of the City of London after serving an apprenticeship to Jonathan Granger, Citizen and Draper.[16] Jonathan’s will gave me lots of leads to follow up – he turned out to have married Samuel’s great aunt, Mary Port and there’s a memorial to him in the floor of the Abbey Church in Dorchester, Oxfordshire.[17] In fact it was Samuel’s apprenticeship indenture which allowed me to trace the family back to Oxfordshire; he was described as the ‘son of Thomas Port of Shirburn in the County of Oxford Farmer’. I later discovered that Samuel was the son of Thomas and Jane (née Franklin) and that they had married at Shirburn in 1749.[18]

The Port line eventually led me back to the beautiful Oxfordshire village of Dorchester, incongruously the home to a former Saxon cathedral, later a medieval abbey and now the parish church to a relatively small rural village. I discovered that the Port family had owned the Fleur de Lys,[19] then, as now, one of the principal inns in the village and that my direct ancestor, John Port, along with his brother Thomas, had attended Dorchester Grammar School in the 1660s.[20]

I had got to know the family so well and had fallen so deeply in love with Dorchester and everything about it that, to be perfectly honest, I would have been devastated if I’d ever found anything which proved that these weren’t my ancestors after all. But for 15 years or so, my connection remained no more than a (very convincing) theory. Then, in 2019, I took a DNA test.

I had of course hoped that the results would throw up links to more distant members of the Port family but other than a few names which appeared to prove that my grandma had been right about Frederick Port being her father, there was nothing. But then, about a week ago, I decided to look a bit closer and to try some of the other names associated with Mary Ann’s family. I looked for Truman links but nothing came up and then I tried the name Franklin.

I’ve still got to do the research to complete the final piece of the jigsaw but I will be very surprised if John and Jane don’t turn out to be siblings, or at the very least, first cousins. After more than 30 years of searching; after hour upon hour spent following leads that led nowhere; after filling at least five binders with copies of documents that might, one day, prove to be connected to me, I had the proof I needed. The proof that the theory I’d developed all those years ago was correct; that my great great grandfather, Thomas Port, was connected to the Port family of Shirburn and Dorchester and that I could finally claim them as my own. 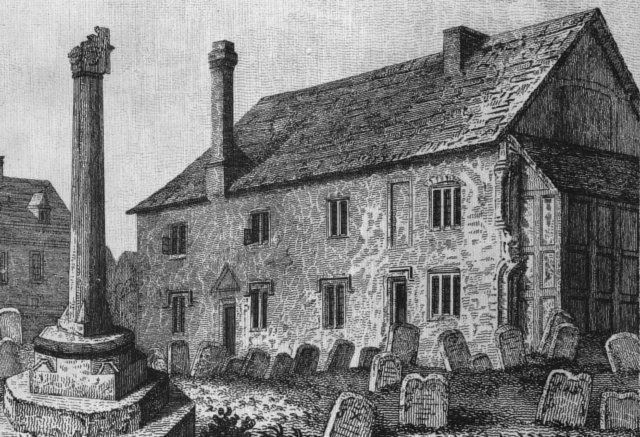 Whether Thomas was the son of Mary Ann or of her sister, Ann, is a detail which I will probably never be able to resolve but the crucial evidence of relationship is there. And this isn’t the end of the story, not by any means. I’m delighted to say that I still have so much to do…