This is the second of a three-part blog, telling the story of how I broke down a 30-year old brick wall in my research. Read Part One here…

The information that my grandma passed on to me had allowed me to discover a whole new branch of the family. And as someone whose ancestry, according to everything I’d known up until that point, was entirely Scottish, Irish and Manx, it was nice to have an English line to research for a change.

It didn’t take me long to find out more about my new great grandfather. Frederick Thomas Port, to give him his full name, had been born on 7 July 1850 at an address in Church Street, Buckingham.[1] He was the second child and oldest son of Thomas Port (a draper) and his wife Mary (née Layton). 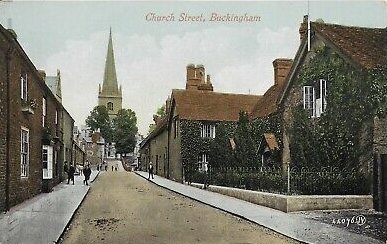 Thomas and Mary had married on 1 June 1847 at the ‘Old Meeting’, an Independent Chapel in Well Street, Buckingham, a few minutes’ walk from Church Street.[2] A daughter, Kate Elizabeth Mary Port was born in Buckingham in 1849 but the family were soon on the move, to Birmingham where two more children were born, and then to Smethwick, where one more arrived. Sadly, Mary, died in 1859,[3] and about 18 months later, Thomas remarried.[4] Thomas and his second wife (Mary Ann Berrill) went on to have eight more children. Six of Thomas’s thirteen children died young but the other seven all survived to adulthood, four of them having children of their own.

I got to know the family quite well. There were some interesting characters in there, including Annie who worked for many years as a ‘Ladies Companion’, Percival who became a teacher and Nellie who was the head mistress of an Elementary school.

Thomas had clearly done quite well for himself. He retired from business sometime in the 1870s and later moved to the Worcestershire village of Chaddesley Corbett where he died in January 1900.[5] His will, intriguingly, mentioned his ‘portrait in oils’ and his ‘family bible’. This was not the sort of ancestor I was used to dealing with!

But there was a problem regarding Thomas’s birth. Each of the censuses from 1851 to 1881 gave his place of birth, somewhat unhelpfully, as ‘London, Middlesex’. It’s not until 1891 that we get the crucial additional detail telling us that he was born in St Pancras.[6] However, no trace of his birth/baptism could be found in St Pancras or anywhere else in London for that matter, and to complicate things further, there was some confusion regarding the identity of his father.

When Thomas married for the second time in 1861 he gave his father’s name as Thomas Port (deceased), a grocer, yet on his first marriage certificate, there was a big blank space where his father’s details ought to be.

I’ve seen enough cases like this over the years to recognise an attempt to cover up illegitimacy when I see one. This looked to me like a classic example of the relative impact of motive and opportunity when it comes to the lies that our illegitimate ancestors tell and I felt certain that Thomas was illegitimate.

When he married for the first time in Buckingham he was doing so in the place where he had grown up (at least, I’m pretty sure that’s where he grew up) and he would have been well known in the town. He may have had the motive to lie about his father but he didn’t have the opportunity. Fourteen years later, living in Smethwick, many miles from his childhood home, and with a reputation to maintain as a successful young businessman, he now had the motive and the opportunity. And the result? An invented father, conveniently deceased to explain his absence from the wedding ceremony.

Of course, this theory didn’t emerge overnight. It was developed over many years, during which I continued to search for evidence of Thomas’s origins. As more material became available online my chances of discovering something that would break down my brick wall would surely increase; yet, the launch of each new database left me frustrated. The release of the London parish registers database on Ancestry was just one of several false dawns; my hopes that I would find a record of Thomas’s baptism were consistently dashed.

I’m a strong believer in the idea that if we’re struggling to find a record of someone’s birth, we need, instead, to look for evidence of their birth. Could I find a family that Thomas might have belonged to? The search began in Buckingham, where we know that Thomas was living in the mid-to-late 1840s.

One the most exciting developments in family history research in the early part of the 21st century was the establishment of the FreeBMD database (an online version of the GRO’s index to births, marriages and deaths) and once this was sufficiently populated I was able to start doing some creative searches. I soon discovered that only four events relating to the surname Port had ever been registered in Buckingham: Thomas’s marriage in 1847, the births of his two children in 1849 and 1850 and the death of a Mary Ann Port in 1846.[7] 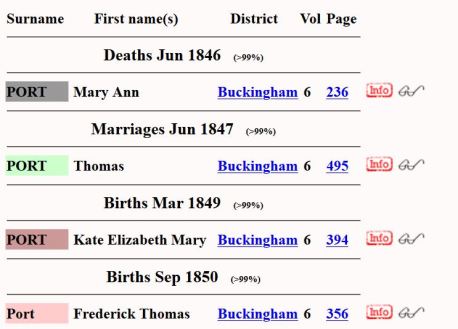 Screenshot from FreeBMD website, showing the only entries for the surname Port in the Buckingham registration district

Of course, I had to order Mary Ann’s death certificate but when I had it in my hands I quickly saw that there wasn’t a lot to work with. Mary Ann died on 19 May 1846 and she was evidently a single woman (at least no former or current husband was mentioned) and she was described as a Gentlewoman. She was 57 years old and she died of Icterus (i.e. jaundice). The informant was Martha Pipkin, the wife of an agricultural labourer, with no apparent relationship to Mary Ann.

Who, then, was Mary Ann? I couldn’t find a promising record of her baptism (of course I had no idea where she was born) and there was no trace of her in the 1841 census (but then, I’d never found Thomas either). A Mary Ann Port of the right age was an inmate in the Northampton County asylum[8] but was that her? A death notice published in the Bucks Herald described her as ‘Miss Port, formerly of Missenden’[9] and I found a record of her burial in the parish church of Buckingham[10] but, again, this didn’t get me anywhere. I looked for a will and I couldn’t find one but I did find that letters of administration of her ‘Goods Chattels and Credits’ were granted at the Prerogative Court of Canterbury on 9 June 1846 to her ‘Cousins German’ (i.e. first cousins), Samuel Truman and Mary Stevens.[11]

The equivalent entry in the Estate Duty Register[12] confirmed this while providing me with additional information by describing the two administrators as Samuel Truman of the Legacy Duty Department, Somerset House, Gentleman, and Mary Stevens of Kingston in the parish of Aston Rowant, Oxfordshire, Widow. Two other names were also mentioned; William George Moulting of Holloway and John Osbertus Truman of Wandsworth, both Gentlemen.

There were plenty of clues to follow up here but the big breakthrough didn’t come until I stumbled upon (through the simple but effective process of looking at all the Port wills I could find) the will of Samuel Port, a wine merchant of Savage Gardens in the City of London.[13] Samuel wrote his will on 13 February 1799 and evidently died shortly after adding a codicil on 1 April 1799, as the will was proved on 21 May the same year. 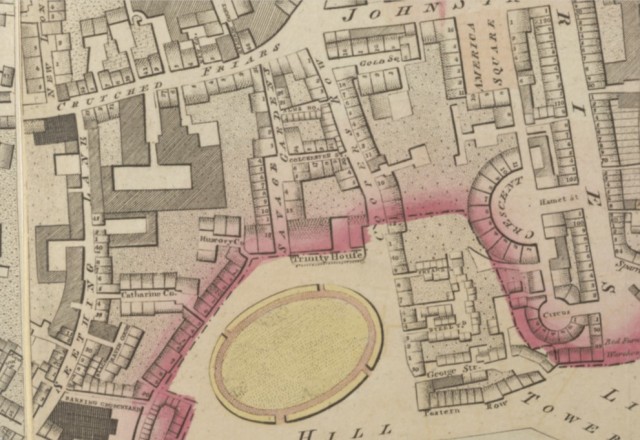 It’s quite a long and complex will, and a connection to Mary Ann wasn’t immediately apparent. Samuel mentions his wife and children but doesn’t actually name them; he does however leave bequests to a number of other named relatives – various in-laws, nephews and nieces – including his nephew Samuel Truman, the son of his wife’s brother Joseph, and ‘the Children of my Brother James Port of Kingston Blount in the County of Oxford’.

Research revealed that Mary Stevens was the (married) daughter of Samuel’s brother, James and it didn’t take me long to work out that if Samuel Truman and Mary Stevens were the nephew and niece of Samuel Port and the first cousins of Mary Ann, it made sense that Samuel Port must be Mary Ann’s father.

Armed with an address in London (Savage Gardens was in the parish of Allhallows, Barking-by-the-Tower) I was able to confirm this by finding the baptism of Mary Ann, the daughter of Samuel and Elizabeth Port at Allhallows church on 7 September 1788.[14]

I had developed a theory that my Thomas was the illegitimate son of Mary Ann Port. All that remained now was to test that theory by building up as full a picture of Mary Ann’s family as I could. And it only took me about 15 more years…