Did you know that I knew my father?

Posted on March 9, 2020 by Lifelines Research

This is the first of a three-part blog, telling the story of how I broke down a 30-year old brick wall in my research.

“Did you know that I knew my father?”

We were in Saughton Cemetery in Edinburgh sometime in the mid-to-late 1980s, looking for some family graves, when, completely out of the blue, my grandma asked me this. I wasn’t quite sure how to react. I had known for some time that she was illegitimate but it wasn’t something that we talked about. I had always felt that it wasn’t right to ask her about an aspect of her life that she might have felt embarrassed about and I had assumed that this part of the family history would be permanently closed to me. But suddenly it was all opening up.

My grandma, Margaret Howland, was born in Edinburgh in 1906. She must have been in her early 80s at the time but she was still the wonderful, strong, positive woman that I’d known all my life and I understood how difficult this must have been for her. Had she ever spoken to anyone about it before? I found out later that she had never told my dad – her son. Perhaps it was easier to tell someone a bit more detached; someone who she knew had a passionate interest in the family’s stories.

It all came pouring out. Her father had been a man called Frederick Porter. He was English but he’d worked in Edinburgh for Cadbury’s. His wife was, apparently, disabled and my grandma’s mum (also Margaret Howland) had worked for the family as a domestic servant. I don’t remember how much detail my grandma went into on this particular point but it wasn’t too hard for me to fill in the gaps. My great grandma had become pregnant by Frederick and my grandma was the result.

It’s impossible to know the details of what happened next but Frederick evidently acknowledged his parentage and seems to have provided my great grandma and her young daughter with financial assistance. My grandma even remembers going to his house (she later took me to the address in Davdison’s Mains) and playing tennis in the courts at the back.

Life must have been a struggle at times for the two Margarets but, thanks to Frederick’s refreshingly responsible approach, they were at least financially comfortable. 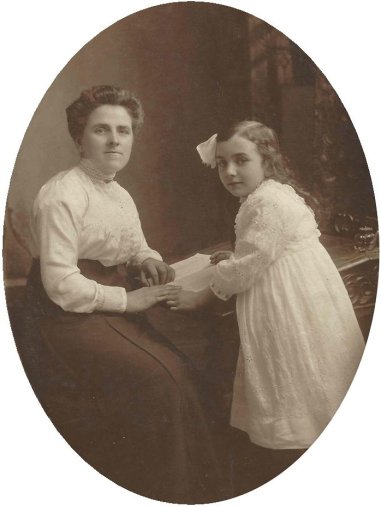 Of course, I wanted to know more but all my efforts over the next few years to track down Frederick Porter were frustrated. By now my grandma was in a home, suffering from Alzheimer’s so I couldn’t go back and ask her any more questions.

I hadn’t made any progress with the research for several years when I found myself in the library of the Society of Genealogists one day and noticed an Edinburgh Post Office directory dating from the early 1900s. Of course I had to look for Frederick Porter and, of course, I didn’t find him. But I did find something that grabbed my attention; an entry for Cadbury Brothers Ltd, which stated that they were ‘represented by F. Port and G. Pickering’. This, surely, was my man – Frederick Port, not Frederick Porter.

Armed with this vital new piece of information I was soon able to piece together the details of Frederick’s life. He had been born in Buckingham in 1850, the son of Thomas and Mary Port and had married Edith Bushnell in 1872. He and Edith didn’t have any children (my grandma had told me that Frederick’s wife was unable to have children so this rang true) and they’d arrived in Edinburgh sometime in the 1880s.

Frederick came to an unfortunate end in 1917 when he was run over by an omnibus while on a business trip to Brighton. He apparently lingered in hospital for a week or two before succumbing to his injuries.

My grandma would have been aged just 11 at the time and while they didn’t perhaps have the traditional grandfather/granddaughter relationship it must nevertheless have been a traumatic event in her young life. Apart from anything else, it signalled the end of the financial support that Frederick had been providing for her and her mother.

It’s dangerous to extrapolate too much from this but it seems that Frederick’s wife also took an interest in my grandma and in one of the most fascinating documents it’s ever been my pleasure (?) to read we get an idea of the complex inter-relationships that were at play here. Two months after Frederick died, on 24 December 1917, Edith wrote her will. She left her entire estate to John Walter Stammers and his wife (Stammers had lived with Frederick and Edith since their arrival in Edinburgh – I really need to find out more about him) and she also named them as her sole executors:

The description of my grandma as Edith’s ‘adopted daughter’ is intriguing and I can only imagine my great grandma’s reaction to all this. While there might have been a financial incentive here, the emotional ties between mother and daughter were surely far stronger. Her response to the idea that she should give up her daughter was, I suspect, probably quite short and succinct!

This was presumably the last contact that my grandma and her mother had with the Port family so it’s hardly surprising that all memory of them was lost over the years and that when my grandma tried to recall what she could some seventy years later she mis-remembered some of the details.

If nothing else, this whole episode serves as a reminder to us all that we should do whatever we can – with an appropriate degree of tact and sensitivity – to tease out these stories from our elderly relatives. If my grandma hadn’t asked me that question in the Edinburgh grave yard all those years ago, the story of her father’s identity would have died with her. And while I didn’t do anything proactive to get her talking, perhaps it was my quiet enthusiasm for the subject that encouraged her to talk…

6 Responses to Did you know that I knew my father?