The story behind the stone

Posted on May 9, 2020 by lifelinesresearch

About 35 years ago, I was involved with a project to record the monumental inscriptions in Aldenham churchyard for the Hertfordshire Family History Society. The churchyard contains hundreds of gravestones but one in particular, recording the death of a woman and three of her children on the same day, grabbed my attention and I had to know more about the story behind the stone.

Despite its proximity to London, the Hertfordshire parish of Aldenham has largely retained its rural character. True, the M1 now follows its western boundary and, in the mid-nineteenth century, the main London to Midlands railway line was cut through the eastern part of the parish, transforming, beyond recognition, the once-sleepy hamlets of Radlett and Barham Wood (aka Borehamwood). But those eastern districts are the only heavily populated parts of the ancient parish of Aldenham today; the remainder still consists mainly of farmland, punctuated by small, isolated settlements, along with a couple of prestigious Public Schools.

The population of Aldenham was fairly settled in the first half of the nineteenth century. The 1851 census tells us that nearly 70% of the inhabitants of the parish had been born in Hertfordshire (the vast majority in Aldenham itself) and a further 10% or so were from the neighbouring county of Middlesex.[1] Among the remaining 20% of incomers were the Whitley family, Edmund and his wife Elizabeth, who had left their native Oxfordshire sometime around 1830, Edmund taking up the role of Bailiff on the substantial Aldenham estate. The Whitleys arrived in Hertfordshire with four young children and a further eight were born in Aldenham. Eleven of the twelve were boys, Jane, the only daughter dying young in 1832.

Edmund’s seventh son, Edward, was born in 1838.[2] The 1841 census finds the Whitley family (Edmund, Elizabeth and seven of their children) living at an address listed in the returns simply as ‘Cottage’.[3] It’s difficult to be certain but it seems likely that the cottage was NOT the stunningly well-preserved, half-timbered medieval Patchett’s Cottage which sits opposite the foot of Summerhouse Lane, but a now-demolished property, a little bit further along Hillfield Lane, heading towards Patchett’s Green. The Aldenham parish register records Edmund and Elizabeth’s abode as ‘Delrow’ at the baptisms of five of their eight children, including Edward’s.

Aged 13, Edward is listed in the 1851 census as a Scholar[4] but by the time of the 1861 census, he had married and left home. The parish register of St John the Baptist, Aldenham, records the marriage, on 10 September 1859, of Edward Whitley (a bachelor and Gardener, giving his address as Bushey Grove – presumably he was working there at the time) and Mary Ann Smith.[5]

Mary Ann was the daughter of John Smith, who she describes as a Policeman at the time of her marriage. She was a few years older than Edward, having been born in Bushey and baptised at the parish church of St James on 8 November 1835.[6] The Smith family can be found in the 1841 census living at Batler’s Green, Aldenham, a mile or so from the Whitley’s house at Delrow.[7] Edward and Mary Ann must have known each other as they were growing up. At the time of the 1851 census, Mary Ann was working in Stanmore, Middlesex as a House Servant for the family of George Ramsey of Grove House, the ‘Principal of a Private Scholastic Establishment’.[8] 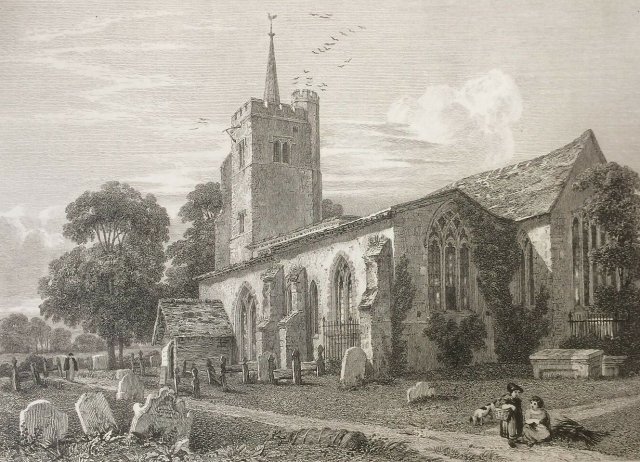 St John the Baptist, Aldenham, engraving, ca.1815.
From The History and Antiquities of the County of Hertford , Robert Clutterbuck (1821)

Their first child, a boy named Edmund (after Edward’s father), was born in 1860, and the following year we find the young family living in a cottage at Piggot’s Farm, in the hamlet of Letchmore Heath, where Edward’s brother James was farming.[9] Edward was still working as a Domestic Gardener, probably at the nearby Piggot’s Manor House.

Three more children followed in the 1860’s – a boy (Philip) and two girls (Ada and Elizabeth Jane) – and we next pick the family up in the 1871 census, living at 3 Spring Cottages, Aldenham, close to the famous Aldenham Grammar School.[10] Edward and Mary Ann were to have two more sons – William Richard, born in 1872 and James Charles in 1874.

Edward was recorded in the 1871 census as a Labourer but the baptisms of his children tell us that he had a variety of jobs in the 1860s and 70s. At the baptism of Elizabeth Jane in 1868 he was described as an Agent for Lord Rendlesham (the Lord of the Manor) while in 1874, when his youngest son (James Charles) was baptised, Edward was working as an Engine Tender at Aldenham School. At other times he was a Labourer or a Gardener.[11]

The winter of 1879-1880 was a cold one with sub-zero temperatures recorded in the south of England throughout the second half of January.[12] In early February, icy conditions still prevailed in Hertfordshire but the temperatures were starting to rise. On the afternoon of Wednesday 4 February 1880, two of Edward and Mary Ann’s children (Elizabeth Jane, aged 13 and William Richard, 8) were playing on the frozen pond next to their house when they went through the ice. The story of what happened next was reported in detail in a local newspaper:[13]

Ada, the eldest daughter, seeing their danger rushed on to the ice to endeavour to save them, when she also was immersed. The screams of the younger child brought the poor mother to the spot, and she, without a thought for herself, rushed madly on to the rotten ice to share the fate of her three children.

Edward was about half a mile away and heard the cries of the children and the sound of a dog barking and immediately ran to the scene. But he was too late. He managed to pull Mary Ann out alive but she died later the same day. The three children were all drowned.

An inquest was held at Edward’s house on Friday 6 February, and the jury ‘without hesitation’ returned a verdict of ‘death by accidental drowning’.[14] Two days later, Mary Ann, Ada, Elizabeth Jane and William Richard were buried at Aldenham. The gravestone still stands today, right at the edge of the churchyard, overlooking the road. It’s in remarkably good condition, considering that it’s now over 140 years old.

We can only imagine the impact that the tragic events of the day had on Edward and his three surviving sons. By the time of the 1881 census they had, perhaps understandably, moved out of the house with the pond and were living just along the road from the old family home in Delrow.

Later that year, Edward remarried. His second wife was Harriett Beeney, a Domestic Servant and a Londoner by birth. They were married at the parish church of St Mary, Bryanston Square, Marylebone on 7 August 1881, a year and a half after Mary Ann’s death.[15] Edward and Harriett moved into a house in Elstree Road, Bushey Heath where they had two children (Margaret Edith and Henry). Edward continued to work as a Gardener until his death in 1916, aged 78.[16] Harriet had died in 1903, aged just 54.

One aspect of the story had always frustrated me. Where was the Whitley’s house and where was the pond?

It was clear from the records that Edward had had a number of different jobs during his time in Aldenham and equally, that he and Mary Ann had lived at a number of different addresses. I wanted to know precisely where they were living at the time of the drowning, but the newspaper reports were unclear.

The Watford Observer reported that the inquest was held ‘at the house of Edward Whitley, the bereaved husband and father.’ The report went on to say that:[17]

The house is a Lodge to Hillfield Park, and the pond where the deceased were drowned is at the back of the premises.

Contemporary maps show that there were two main lodges to Hillfield Park (or Hilfield) but those buildings are still there on Hilfield Lane today, and they are altogether more grand than the description of Edward’s house given at the time in another report on the inquest:[18]

Standing in one corner of Hilfield Park is a lodge of four rooms, which from its isolation, dilapidated exterior and apparently uncared for surroundings gives the idea of a spot congenial to some soul-stirring tragedy, such as had really happened there.

The Inquest was held in one of the rooms of the lodge, and on entering one was struck with the air of comfort and cleanliness, as compared with the exterior and its surroundings, giving evidence of the attention given to her home by the poor woman who was then lying dead in a room above. 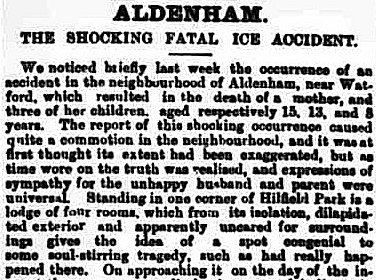 Reading the reports on the inquest more closely, I started to pick up some clues.  Edward was said to have been in the employ of Mr Phillips of Berkeley Cottage. One of the witnesses, William George Sheffield, said that he was about three-quarters of a mile away when Edward’s second son (Philip) came to ask for help. Sheffield said that he and two men (‘Steers and Allen’) went directly to Whitley’s. William White, of the Fishery Inn also came to help, bringing the Royal Society’s drag. They were all, of course, too late but they were at least successful in recovering the children’s bodies from the pond.

Looking for these names in the 1881 census, it soon became clear that they all lived quite close together in an area to the south of Hillfield Park, around the hamlet of Caldecote Hill. George Sheffield lived at Caldecote Lodge, just along the road from Charles Phillips at Berkeley Cottage. William Stears [sic] lived as a lodger at an address not far away in Watford Road, Elstree, the same road in which the Fishery Inn was (and indeed, still is) located.

This encouraged to me look for Whitley’s house in this part of the parish (I’d been focussing on the area to the north of Hilfield where Edward and Mary Ann had previously lived) and I noticed something that I’d missed before. A small building marked ‘Lodge’, some distance to the south of Hilfield but still clearly within the bounds of the ‘park’. Crucially, its location tied in with the reference to the ‘isolation’ of Whitley’s lodge – and even more importantly, there was a pond right next to it! It was also no more than a mile from Caldecote Hill where George Sheffield must have been working when Edward’s son came to get his assistance.

I was sure that this was where the tragedy had taken place on that cold February afternoon in 1880 and I turned to a modern map, mainly to see if the building was still there but also to help me understand how I had missed it before. But my plans to visit the site were quickly thwarted when I attempted to identify the location of the lodge and discovered that it’s now at the bottom of a reservoir and has been for nearly 70 years. 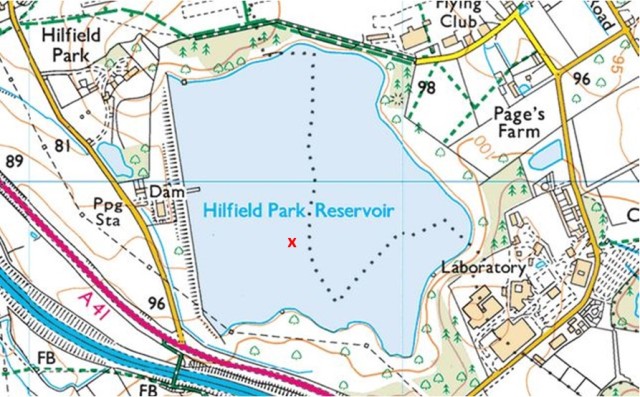 X marks the spot. The approximate location of Whitley’s lodge.
Accessed at osmaps.ordnancesurvey.co.uk, 9 May 2020

The gravestone in the parish churchyard, then, serves as the only remaining physical reminder of an event which must have stayed in the minds of the people of Aldenham for many years. The funeral service was, according to newspaper reports, held in the presence of several hundred people and an appeal ‘to the sympathetic and charitable inhabitants of the neighbourhood’ raised enough money for Edward to pay for the funeral (and the stone!) ‘leaving a few shillings to pay other expenses that must follow the sudden loss of the manager of the household’.

The poor man is very grateful for the sympathy and assistance he has received, and wishes to thank all those who have signed their names to the subscription list, or have sympathised with him in his great trouble.[19]