Posted on February 2, 2020 by Lifelines Research

Every now and then, I dig out some old family photos and see if I can work out who’s who. I usually vow, then and there, to sort them all out, scan them and begin the process of identifying as many faces as I can and making useful, meaningful notes on them. 24 hours later, the box goes back in the attic and I forget about them until the next time I want to find a particular photo to answer a family query or to illustrate something I’m writing about.

This morning, I was looking for something in my Granny’s Treasure Chest* and I came across this wedding photo which I had seen many times before, without ever thinking about whose wedding it was and why my Granny might have had a copy of it.

I only recognised two of the people in it; the tall man on the right was my great grandfather, David John Davidson (1873-1953) while the natty gentleman in the middle was my uncle Tom Carlin (1900-1979). He wasn’t actually my uncle, he was my Granny’s first cousin, but in a large Roman Catholic Edinburgh family like mine, relationships were quite flexible and terms like ‘uncle’ and ‘aunt’ were often used in this honorific sense.

I asked my cousin Norah, Tom’s daughter, but she wasn’t able to add any names or provide any further clues. She only recognised her father, so I had to conclude that the connection to the photo came through my side of the family rather than hers and I went back to it, to see what else I could come up with. Perhaps the biggest clue was the fact that Tom was in his RAF uniform which, together with the evidence from the clothes worn by the others in the picture, placed it in the first half of the 1940s. Tom was a conscript during World War Two rather than an RAF ‘regular’ (Edit: Norah tells me that this is wrong and that her father ‘joined the RAF some time between Munich and the outbreak of war because, like many at the time, he thought war was inevitable.’)

A quick scan of the family tree looking for a marriage in the 1940s with connections to both David and Tom turned up an interesting candidate. My Granny’s brother, John Davidson (1896-1969), married in Aberdeen in 1942. Could this be his wedding?

I never met my great uncle John, or his wife, Marjory, and I only knew him at all from a few photos, taken when he was a child. But there was enough in the photos to encourage me – the ears, I felt, looked particularly convincing!

If it was John in the photo, he would have been 45 at the time and the bride would have been 36, both of which, again, were quite believable. The clincher came when I checked the 1942 marriage certificate and saw, in the column headed, ‘Signatures and Addresses of Witnesses’, the name T. Carlin, 3 Gladstone Place, Corstorphine, Edinburgh. My uncle Tom had evidently been a witness at the marriage of his cousin in Aberdeen in 1942 and this was surely, therefore, a photo of that wedding.

The others in the photo then started to fall into place. That’s probably the bride’s parents at the back on the left, her mother in view and her father hidden by the groom. Then we have the groom, John Davidson, the bride, Marjory Cormack or Sherriffs (she was a widow) and Thomas ‘Tom’ Carlin, John’s cousin. The bridesmaid is surely Mary Cormack (Marjory’s sister?), the other witness from the marriage certificate. Next is David John Davidson, the groom’s father (his mother had died in 1940), and the young girl on the right is probably Marjory’s daughter from her first marriage; a Marjory Marion Sherriffs was born in Aberdeen in 1929.

I feel confident that this photo was taken on 4 April 1942, outside St Mary’s Roman Catholic Cathedral in Aberdeen but I always like to find absolute proof and I was delighted to find it, thanks to Google Map’s Street View function.

There’s not a lot in the way of architectural features in the photo to help us but it seems to have been taken in a corner of the churchyard with, what I initially thought was a gravestone on the extreme left of the picture. I navigated myself to Huntly Street, Aberdeen and quickly found the Cathedral. It’s often not easy to get good close-up views of churches on Google Maps as they’re usually set back from the road or, in urban areas like this, hemmed in by neighbouring buildings – and St Mary’s was no exception. 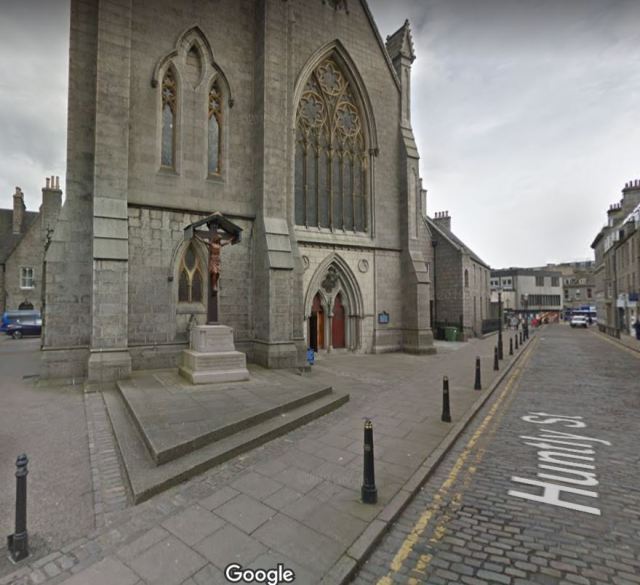 I couldn’t make out the corner of the churchyard and I couldn’t see any gravestones but then I noticed the statue outside the front of the church and when I looked at the plinth I could see straight away that it was the same one as the one in the photo. 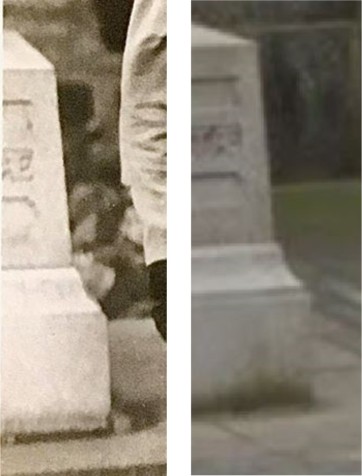 Views of the plinth – left from the 1942 wedding photo, right from Google Maps, accessed 2 February 2020

The statue must have been relocated sometime in the past 78 years as the part of the building behind it in the modern Google Street View doesn’t match what we can see in the 1942 photo but there can be no doubt that it’s the same piece of masonry.

So that’s one photo sorted. Now I just need to get to work on the other few hundred…

* It’s actually a cardboard box, but it’s full of family photos and documents that I inherited when my Granny died in 1991, so it’s a treasure chest to me.

1 Response to A mystery wedding photo