What would I have done?

Posted on February 7, 2018 by Lifelines Research

I’ve very much enjoyed reading all the recent blogs, tweets and news items marking the 100th anniversary of the passing of the Representation of the People Act (1918); that ground-breaking piece of legislation which gave the vote to women aged 30 and over and extended the male franchise to include all adult males. Ironically, the Act enfranchised the remaining 42% of men who had not previously been eligible to vote while doing the same for just 40% of women. The 1918 Act was clearly important, but it was really just a step in the right direction and perhaps it’s the 90th anniversary of the Equal Franchise Act (1928) that we should be celebrating right now; it was under the terms of this later Act that women finally achieved full electoral equality in the UK.

I like to think of myself as fairly enlightened; someone who fully supports what are generally thought of as feminist causes, and as a historian, I often wonder how I might have responded to the political issues of previous eras. Would I have been at St Peter’s Field, Manchester on 16 August 1819 to demand parliamentary reform (and get caught up in the horrors of the Peterloo Massacre)? I’m sure I would have sided with the Tolpuddle Martyrs but would I have been one of the thousands of people who gathered on Kennington Common in the spring of 1848 to march on Whitehall and present the great Chartist petition to Parliament? I’d like to think so but most of all, I’d really like to think that I would have been a passionate supporter of the Suffragist cause.

So much has been written about the Suffragettes; about Emily Wilding Davidson, Emmeline Pethick-Lawrence, Sophia Duleep Singh, Charlotte Despard, Annie Kenney and, of course, about Emmeline Pankhurst and her daughters Sylvia and Christabel. And there were thousands more whose names are not so well known; ordinary women who took a stand against what we now see as a clear and obvious injustice but which at the time was viewed by many as the natural order of things.

The 1911 census was, to many in the Suffragist movement, the perfect vehicle through which to focus dissent. Under the slogan ‘No Vote, No Census’ a campaign of civil disobedience was launched, encouraging women to refuse to fill up their census forms and to endorse them with the phrase, No Votes for Women; no information from Women. Women who were not householders were asked to refuse the requested information or to absent themselves from home for the night.[1]

Hundreds of examples of ‘spoilt’ schedules have been found in the 1911 census, recording a mixed degree of success when it came to evasion of the census. My favourite failed attempt at census resistance relates to a woman called Eleonora Hawkesworth. In 1892, Eleonora, then aged just 17 had married Edward Arthur Maund, a man 22 years her senior. Maund was a Director of the British South Africa Company and a former African explorer who, along with men like Cecil Rhodes, was instrumental in the British conquest of Rhodesia and appears to have had what we might call a ‘colonial’ mindset.

His views come across loud and clear on his 1911 census schedule.[2] After Maund had completed the form, listing himself, his wife, three children and two servants, Eleonora had evidently got hold of the form, scored out her own name and written ‘Wife Away’ at the foot of the form. Unfortunately, before the form was collected by the census enumerator, her husband discovered what she had done and took action himself, restoring Eleonora’s name and other details, and writing (in red ink):

My wife unfortunately being a Suffragette put her pen through her name, but it must stand as correct it being an equivocation to say that she is away she being always resident here & has only attempted by a silly subterfuge to defeat the object of the Census. To which as “Head” of the family I object. E A Maund

But surely not all men were cut from the same cloth as Edward Arthur Maund. Surely, there must have been thousands of right-thinking men who fully supported the Suffragist cause; what did they think, and more importantly, what did they do about it?

Well, when it comes to support for the Suffragette’s census campaign, one man stands out from the crowd. His name is not well-known but perhaps it deserves to be. Let me introduce you to Mr Victor Prout…

Victor William Prout was born in Marylebone in 1862, the son of Victor Albert Prout and his wife, Amy Sarah (née Barber). His father was a pioneering portrait photographer and as a young man Victor followed a similar vocation, becoming an engraver. As early as 1881, he is listed in the census as an ‘Engraver on Wood’.[3]

He was also clearly interested in feminist causes; I am grateful to Elizabeth Crawford, the author of The Women’s Suffrage Movement: a reference guide (Routledge, 1999 and 2001), for sending me a copy of one of Victor Prout’s engravings. Published in the popular illustrated newspaper The Sphere on 8 February 1902, it is entitled ‘Women Who Work At Our Coal Mines; Cleaning Coal at the Pit Brow’ and illustrates the grim conditions in which the women were working.

Women Who Work At Our Coal Mines. Engraving by Victor Prout, published in The Sphere, 8 February 1902

Victor Prout appears to have been doing quite well for himself, with numerous commissions as a book illustrator coming in during the 1890s and early 1900s. His illustrations also appeared regularly in The Sphere from June 1901 onwards and seem to have become increasingly political in content. In November 1905, he covered the Women’s march on Downing Street (‘The Women’s Deputation To The Prime Minister’) in a highly sympathetic engraving. 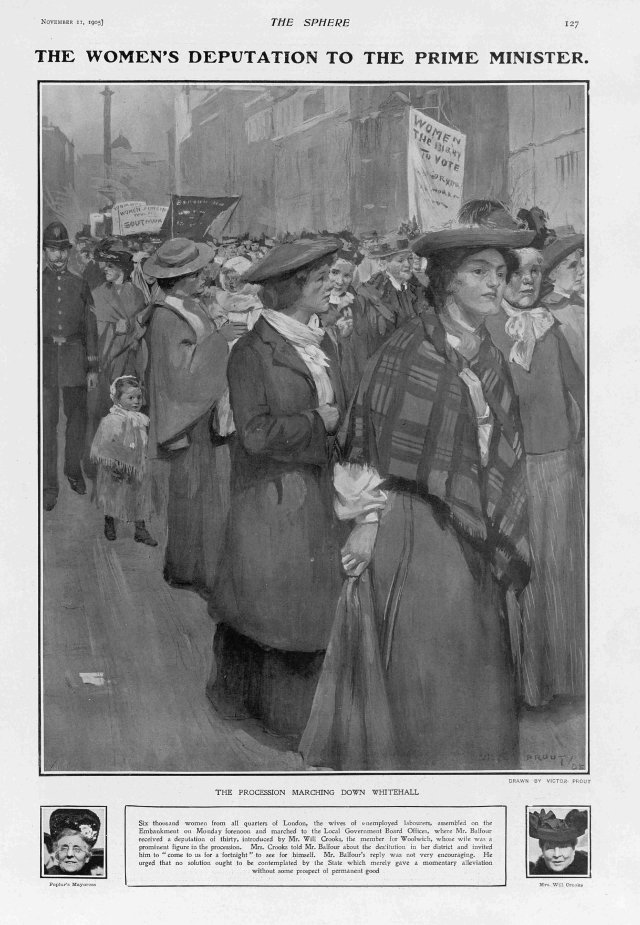 The Women’s Deputation to the Prime Minister. Engraving by Victor Prout, published in The Sphere, 11 November 1905

So, when the call went out to women to resist the census, it’s perhaps not too surprising that Victor was listening and was prepared to do his bit. When Percy Cooper, the enumerator for the Palmers Green district of north London in 1911 went to collect the census schedules for his district, the form returned by the occupants of 6 Stonard Road wasn’t quite what he was expecting. Instead of completing the schedule, Victor Prout had written the following statement across the form[4]:

I wish to protest against the terrible treatment women have recently been subjected to as the result of the Liberal Government’s method of repressing the agitation in favour of Women’s Enfranchisement and I refuse to fill this census form because women are claiming that until they are given the rights of Citizenship they should not be counted and I leave out the men as an act of sympathy with that claim. All the withheld information will be freely given as soon as a Women’s Enfranchisement Bill becomes law. Victor Prout 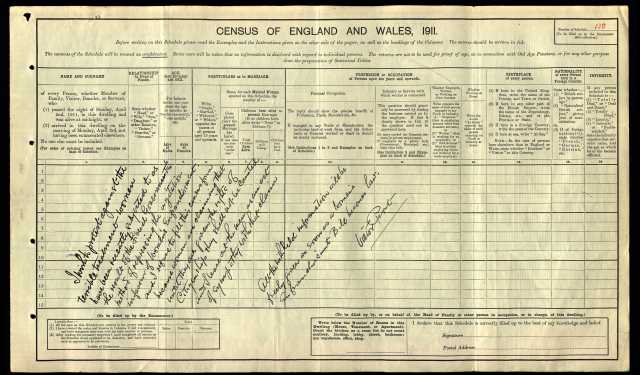 The following day, Cooper sat down and wrote a letter to J H Judd, the local registrar.

As a result of a tramp yesterday from 8 am to 9.30 pm I got in all my schedules, except six which I was unable to obtain owing to people being out. I however secured the remaining six today.

I have to report that Mr Victor Prout of 6 Stonard Road, Palmers Green refused to properly fill up the form or give any information (notwithstanding I read the Riot Census Act (sec: 2) to him)…

The registrar must then have taken it upon himself to write to Mr Prout. This letter hasn’t survived, but Prout’s reply has and it makes fascinating reading:

Thank you for your courteous and kindly note asking me if it is not possible to reconsider my decision in reference to my census form.

Let me assure you that on my part I do not wish to cause distress either to yourself or anyone else. My protest is of course not directed to you but the Government and my reason is stated on the form.

Please do not feel anxious that any action which it may be your duty to take on account of my having refused to fill up the Schedule will cause any unpleasantness. All my past relations with yourself have been of so pleasant and friendly a nature that that would be quite impossible.

Believe me when I say that any action you may feel it your duty to take I shall welcome most gladly and let me add in conclusion that no one regrets more than I do the stern need which compelled me to take the course I did.

With kindest regards, I remain
Yours sincerely
Victor Prout

The final part of the story comes in the form of a memorandum from the Census Office addressed to the Registrar Mr Judd, advising him to ‘fill up a schedule with the best information available concerning Mr Prout and the other occupants on Census night.’

And that’s exactly what he did, as the final version of the schedule reveals.

It’s clear from this that the Government were keen not to give additional publicity to the Suffragette’s campaign by prosecuting offenders. Instead, they took a more pragmatic view and got the best data they could.

From the summer of 1912 we start to see Victor’s name appearing in notices promoting Women’s Suffrage Meetings and in October 1912 he is specifically named as the Honorary Secretary of the Men’s Federation for Women’s Suffrage.

Notice regarding the Men’s Federation for Women’s Suffrage, published in The Suffragette on 25 October 1912. Page 27 column c

It’s clear from the very existence of this organisation and other similar ones such as the Men’s League For Women’s Suffrage that Victor Prout was not alone but as far as I’m aware (and I would love to hear otherwise) Victor was the only man to have personally adopted this particular course of civil disobedience advocated by the Suffragettes.

I’d like to think that I would have done the same – who, knows, I may even have joined Victor in the Men’s Federation for Women’s Suffrage…